Tuesday's Twist:  A basic recipe with a fun twist.  In other words, just another excuse for me to play around with weird recipes I've been dying to try.

I never intended to post this recipe and it's a bit of a stretch to post it under Tuesday's Twist. But in real life the zucchini and mushrooms in the refrigerator needed to be put to use and I had all the right ingredients without going to back to the store. The recipes I had planned for this week need a little more work and one of the ingredients melted in the car.  All this means you are temporarily being dragged into my quest for a decent homemade veggie burger.  Don't worry, I'll keep most of them to myself (unless my chocolate chips melt into single entity on a weekly basis). 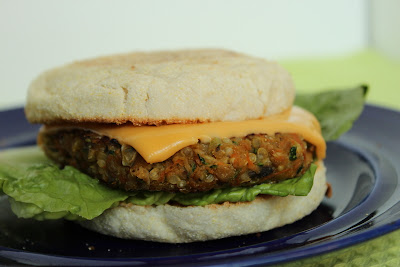 Most meatless burgers are bean based with added breadcrumbs, oats or potato for binding. I don't know about you, but I prefer to get my carbs from the bun not the burger itself.  Because they are vegetarian, they are often called veggie burgers even if they contain relatively few vegetables.  This burger recipe is unique in that it uses no beans, breadcumbs, flour, oats or potatoes.  It's loaded with vegetables and utilizes quinoa and TVP for added protein.

The TVP was actually a afterthought rescue attempt.  The mixture had way too much liquid from the shredded zucchini so I added TVP in hopes that it would soak up the excess moisture.  Yes, I could have added oats, flour or breadcrumbs, but I liked the idea of extra protein instead of extra carbs.  Eggs are common binders in veggie burgers but I hadn't seen cornstarch utilized before.  The cornstarch helped the patties set up after cooking, but it didn't help hold the mixture together before cooking.  Even after adding the TVP the batter was so wet it was difficult to form into patties.  It may help if you make a smaller, thicker patty with your hands and then flatten it in the pan by pressing with the back of the spatula. 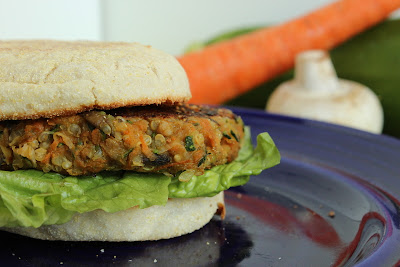 The problem I have with most veggie burgers is the texture.  Many of the recipes I've tried have a dense, paste-like center. Mushrooms are a great addition to most burgers as they provide both juiciness and a meaty flavor.  The quinoa and TVP added texture and bite to these burgers.  However, they were a little stringy from the shredded carrot and zucchini.

I have a long list of veggie burger recipes to try so I probably won't make this one again anytime soon. If I did I would either squeeze out the liquid from the shredded zucchini or saute the vegetables longer in order to evaporate more moisture.  I would also experiment with leaving the carrot raw instead of including it in the sauteed vegetable mix.  Additional binding ingredients would make these easier to work with but overall the burgers still held together after cooking.  The herbs can be adjusted depending on personal preference.  I happened to have basil and thyme on the windowsill.

From the recipes I have tried, I would definitely recommend these Yukon Gold and White Bean Basil Burgers. This weekend my friend Emma and I made some burgers loosely based on these Pea Burgers with Apply Chutney.  Eventually I'll try enough veggie burger recipes to figure out what I like best.  Until then it's one experiment after another. 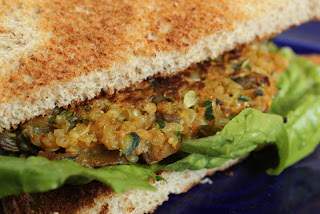 Instructions:
*In a large non-stick skillet, heat olive oil over medium-high heat.  Saute onions, mushrooms, zucchini, carrot and garlic 7-10 minutes or until onion is transparent.  Set aside.
* In a medium bowl, combine cooked quinoa, dry TVP, egg white, cornstarch, salt, basil and thyme. Stir in vegetable mixture.  Refrigerate at least one hour, allowing TVP to absorb liquids.
* Heat a large non-stick skillet over medium heat. Coat with non-stick spray.  Carefully form generous 1/4-cupfuls of mixture into patties and place on skillet.  Mixture will be very wet. You can also scoop mixture onto skillet and fatten into a patty with a spatula.
* Cook burgers 4-5 minutes on the first side before gently flipping and cooking 2-3 minutes more.  Do not flip too early or burgers will fall apart. (Think of it like cooking pancakes; they will fall apart if they don't set up first.)
* Serve on buns with desired toppings such as cheese, lettuce and tomato.

Food for Thought: "A good laugh and a long sleep are the two best cures for anything." -Irish proverb

Melissa
I'm just another 20-something trying to figure out what to do with my life. I've always loved trying out new recipes and playing in the kitchen. You should also know I'm usually wearing something blue. The recipes and ideas on this blog may or may not be tried and true, but they have been tried in blue.